Aldub Phenomenon and The Amazing Legacy of Eat Bulaga! 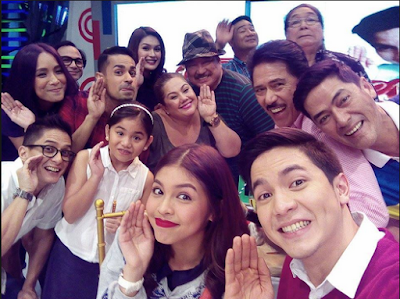 For a time I really felt guilty for delving into something, which to most professing Christians as I am, is shallow and insignificant. Secular entertainment media. As it is I have deliberately avoided secular media (news and Hollywood entertainment and films) for a long time, because I've decided to feed my mind only with wholesome and positive information. And so it has been for so many years that I behaved in a manner that's 'politically correct', rather serious and formal yes,  until   . . ..Aldub and I'm not sure if it's a good thing or not. For sure my hearty laughter has returned. The childishness that I tried to shake-off  has found its way back to me. Now I reckon it must be my GOD-PAPA giving me back some happiness, not with 'just any low quality entertainment' but an entertainment with the heart from the Philippine TV Network claiming to be 'Kapuso' or 'Heart-mate' and rightly so.

Over time, I discovered that almost everything in consumer society is industrialized including the packaging of celebrities' image and personal identity. In showbiz, in general, this strategy is also applied in appalling detail.The image, the motions,the clothing, the words (even, the so-called intrigues or controversies are calculated and intentional to create publicity) . There are managers and producers who have learned this 'so-called art' of showbiz survival/publicity tactics so well that media entertainment has become another 'industrialized' product. Whereas in the past,before the high-tech age, IT innovations entertainment used to be an organic family affair. Very unlike, the kind of systematic and methodical promotion of a showbiz personality, being adopted by the rival network of GMA i. e. 'Kapuso' or 'Heart-mate'.
Eat Bulaga ! in contrast has always maintained the same stance they had when they started 36 years ago. Yup! I was there, as a child when Tito(Sen.Vicente Sotto) his younger brother Vic (Marvic Sotto)  and Joey De Leon started the show, much laughters and happiness in our own family were courtesy of |Eat Bulaga ! And Yup ! Theirs was an organic variety TV programming back then, as it is still now.(When)I have lost my childish happiness for a long time,partly because I had to adjust myself to this European culture. Another thing that is very amazing or amusing and both, is that the relationships they have built from way back,have lasted til now,and have even grown to more, and new dynamic co-hosts. I'm sure many Filipinos have their cultural identity deeply rooted in the legacy of humor that is Eat Bulaga ! ,where there's a natural, laid-back, and low-profile, 'don't-have-to-prove-anything' attitude. They earned it, they have it, they delivered the best of organic variety entertainment truly unique, in the world.

Eat Bulaga ! : A Legacy of Helping and Giving to the Poor

Another thing that has intensified or increased in Eat Bulaga ! is their charitable act disguised behind entertainment and funny segments and games. Whereas the other networks are highly focused on skillfully promoting their talents/shows that perhaps, they have overlooked the needs of their viewers? There is a natural law based on biblical principle, about giving and helping. Each day, through their 'Kalye Serye' (TV Series on-the road) they give away prizes in kind like small appliances/gadgets etc. , and in addition to this they also give away cash prizes amounting to Euros 1500, to a person whose name is picked-out from a raffle box in the studio.Each day there's a new 'road' or place or setting,but the same plot or story continues, with much fun and jokes.I believe this is the reason why GOD has rewarded Eat Bulaga ! with a global phenomenon that is Aldub in the persons of Ms. Maine Mendoza (alias Yaya Dub) dubbed as Dubsmash queen, and Mr. Alden Richards who is proving to have a humble yet strong, soft yet sweet nature and these two seem to be a couple made-in-heaven.

Barely four months have passed and much has been said and done regarding Aldub in relation to Eat Bulaga ! and surely more controversies, ups and downs and challenges. Eat Bulaga's longest running Filipino legacy of wholesome fun will continue through the years.One thing I know, my wild laughters found their way back to my heart and even spreading to my GOD-given family.

GOD BLESS each of us,Tremendously!
Laughter is the best medicine, or as the Holy Scriptures put it in Proverbs 17:22 'A merry heart does good like a medicine.'