Why I can not,or will not leave my ICF church 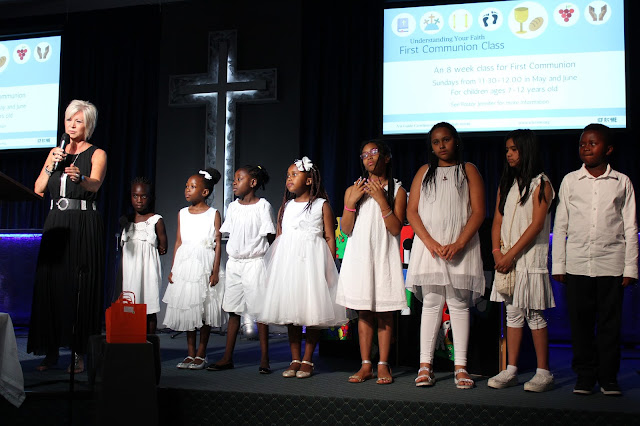 This morning is the first of a 5-day English Summer School Program offered freely by my home-church, International Christian Fellowship;whereas the same program costs as much as Eur 150 per week, per child in a regular school. I wanted to enroll my daughter in a regular catholic-sponsored summer school in our area so she wouldn't get bored but she had been looking forward to ICF 's English school because she had bonded (so) well with many kids. So, this morning it had been easy to make her get-up, she was even singing inside the shower, (she tie-coiled her hair on both sides like the star-wars lady and slept on them the night prior) and she did her hair on her own. When we got to the church,I observed how excited she was as she sang and jumped up and down to the gospel songs which she was already familiar with. At home she was ecstatic as she related their activities and was even jealous that somebody drew better than her.

The main point is that,she was always the one demanding that we go to church otherwise I would get blamed.This is the second year our daughter is attending the ICF summer school program.

Now, flashback to October 13, 1983 the day I was born again,my spiritual birthday. I signed my personal covenant with GOD  in a southern baptist or fundamentalist church in Manila's (Philippine capital) university belt area. I learned so much about GOD and the greatest hymns, and supporting my faith through good works.my first steps in my Christian walk. But then it wasn't long before I left the church due to indifference among the members which is comprised of mainly young students, even though I enjoyed the Pastor's style of preaching.Then I learned that there had been a break-away group and the Pastor that I liked started a full-gospel church which I eventually joined. Then I found my first job which afforded me an independent 'single' life and mixing with happy go-lucky people that,meant backsliding for me. In short, since my spiritual birth, I jumped from one church to the next, hampering my growth and relationship with my Lord JESUS for many years. Then GOD led me Italy where I started from scratch, with no job, no money,nobody for a friend, no means to almost anything. But I/we met a family-clan of fellow-Filipinos who hosted us,fed us and helped us for many months until we were able to stand on our own.Year 2002 I found International Christian Fellowship,about the same time that I met an Italian man who eventually became my husband.ICF became our homechurch up until we had our first and only child,who on her third month of life 'played' the baby JESUS in ICF's 2006 Christmas Nativity scene. Since then, yes there had been a few minor and negligible problems such as bickering,indifference,pride and other forms of immaturity,in this church which challenged me to change church yet again.

Now GOD made me realize that, every church is made up of imperfect people like me, trying to live out the mind of CHRIST. GOD showed me that  the church I'm looking for ,will only begin to exist as soon as we change this corruptible bodies to an incorruptible one. I believe it is GOD Who has planted me and our family,here in this church.

The first time that I stayed so long with one church, not necessarily of my own choice. Personally,I find some church-mates who are not exactly 'like-feathers' with me or vice-versa, but I know in spite of our differences,that GOD understands where each of us is coming from,especially me.In the same token, there are also many members here who make ICF church worth attending. Each of us is different and the best thing we can do is not look to each other but Only to JESUS.
I remember when Peter was curious and wondered (or made a comparison?  about John, in John 21:21) JESUS told Peter 'What is that to you? You follow me.'  As if emphasizing, not to bother about others' business, but our 'business' is exclusively with CHRIST only.

We know that the church is the House of The Father, where HE meets us HIS children. Where HE mainly houses HIS corporate blessings.Where our children are taught GOD's ways and blessed above all.Needless to say, our Heavenly Father loves each of us, and likewise as HIS church, unconditionally.

So having 'said' all, I conclude that; we will have to either (with)stand or celebrate each other's differences until JESUS returns, and praise GOD that HE made each of us unique in HIS Own image.GOD BLESS us all Tremendously in JESUS Name Amen!