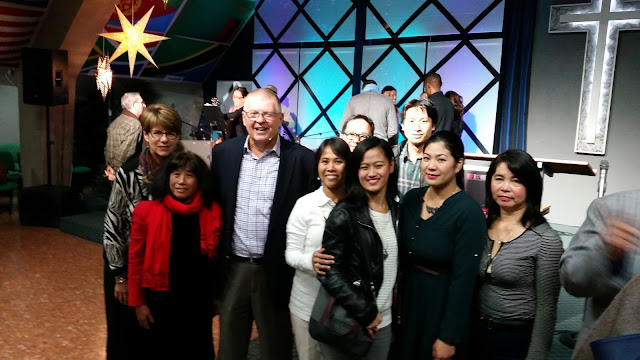 Today at ICF (International Christian Fellowship) Rome, we had a spectacular service led by the visiting Pastor Bill Leach, who highlighted even more and once again the unbelievably Immense but condescending Love of our Lord JESUS towards us HIS Creation,HIS children. He began with a true story of Lt. John Blanchard, who fell in-love with the soft handwriting on the margins of a book he was reading in a Florida library, which to him,reflected an insightful,passionate soul. He traced the owner of the  handwriting from the book cover and wrote to her inviting her to correspond. The next day Lt. John Blanchard was assigned to Europe to serve in Word War II. The next months served as seeds of correspondence between the two;eventually Lt. John asked for her photograph which she declined, claiming, that if he really cared for her,that her looks shouldn't matter. The time came for them to meet,they set their meeting at  Grand Central Station, 7pm New York city. Lt. Blanchard asked how he could recognize her; she replied she would be wearing a red rose on her clothes lapel.At 7pm,Lt. John Blanchard was punctual to meet the girl whose heart he loved,but whose face he'd never seen. In his own words; "A young woman was coming towards me,tall,slim and beautiful.Her long blonde hair laid back in curls from her delicate ears."It's just that,the girl wasn't wearing a red rose on her lapel. But directly behind her was a fat, grey-haired woman well over forty,whose thick ankles tucked tightly onto her low heel shoes.She had the red rose on her lapel.He was very attracted with the first, tall and slim lady before her,but he thought he had in front of him a woman whose words and heart he loved,and with whom he hoped to build a beautiful long-lasting friendship. With a soldier's resolute,he snapped a salute to the plump lady and with feelings of disappointment, he invited her to dinner. Then this grey-haired woman told him smilingly; "Young man, I don't know what this is about. But the young lady before me asked me to wear this red rose on my coat. And told me that if you asked me for dinner,to tell you she was the one and would be waiting for you at the restaurant across the street."

And yet another story of St. Francis of Assisi who turned his back on riches and lived a simple life. One particular occasion, St. Francis saw a leper on the street and he tried to walk past him, then he paused and walked back to where the leper was and embraced him. As he continued ahead, he paused and looked back and saw no one. And he interpreted this as Jesus, taking the form of a leper.

Pastor Bill Leach tied this two true stories to today's verses in Matt. 25:35
When I was hungry you fed me, when I was thirsty you gave me something to drink,when I was a stranger you invited me in.

What struck my heart the strongest,is seeing the pure,powerfully immense love of our Lord JESUS for the least and the poorest, the leper outcast from society, from his loved ones, from his family, maybe his children and wife . .  .. for the longest time this leper lived alone, his numb flesh slowly chipping away parts of his body. Alone, sick and lonely, away from everybody. Then this leper heard about JESUS,that HE is Someone who heals the sick, Someone who did and does many amazing miracles! And just so,  hope lit up in his heart. He came to my JESUS and begged him
"Lord, If YOU are willing, YOU can make me clean." Then JESUS moved with compassion, stretched out HIS Hand,and touched him and said to him, "I AM willing; be cleansed." As soon as HE had spoken,the leprosy left him and he was cleansed.     Mark 1:40-42

What Immense condescending love, JESUS didn't heal from afar, or only by merely speaking, HE stretched out HIS hand, HE touched the leper!  How can you not fall in-love with our Loving Healer?
So much for today, I can go on and on expounding on HIS Love for you, also. But I can't fall in-love with JESUS, in your behalf,in much the same sense that I can't believe GOD for you. YOU MUST know how much GOD loves you. It is a matter of everlasting importance for GOD, that HE sent HIS Only Begotten SON to earth to die,and pay humanity's sin-debt.

You can pray the sinner's prayer to accept HIM into your heart. This is where your new life (born-again) starts. GOD BLESS Tremendously brothers and sisters!