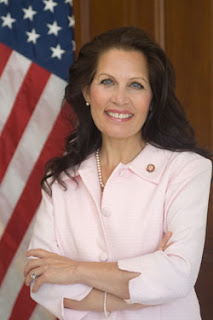 There's a saying, when America sneezes, the whole world catches a cold. This is just another way of saying that we are generally affected by what happens in America and I think it's logical that we get concerned over the events there, like the coming Presidential elections in the year 2012. And among the contenders, there is one woman who dares to stand out and represent the critical convictions that will confront the American electorate,and may consequently make her or break her mainly as a politician. This early, many opposing forces in peculiar forms have already come her political pathway,like a little boy (apparently,trained or instructed by his lesbian mother to make a remark against Bachmann's anti-homosexuality stand). Who is Michele Bachmann? She is a Republican Congresswoman of a small Minnesota district.She's a tax lawyer who formerly worked with the IRS (Internal Revenue Service). She believes that global warming is a hoax (I second the motion), and that BArack Obama is a socialist at heart and an anti-American (an issue to be expounded). She is against the teaching of evolution (monkey business), and she is also against gay marriages (love the person but not his sin).I guess,she is a very Brave dare-angel woman, unlike a 'typical' political candidate who might be willing to hinge his political platform on popular surveys. Her campaign is founded on quite unpopular personal principles,which converts her first political attempt to the U.S. presidency into a very risky battle.If I were an American,I would not only vote for her but I would also campaign and labor for her Presidential victory. In my opinion, Michele Bachmann is the rightful US President.Most Presidentiables would play on what American voters would like, but she dares to set the standards not based on her own.

WiTeD said…
Hello, I visit and give your full support ads and please support ads me back. Thank you in advance.
December 12, 2011 at 4:27 AM

Lina Gustina said…
It would be great if US has female president...