The Rainbow and The Star 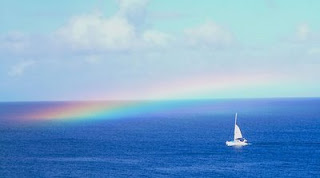 It usually happens that when I think of something, it eventually 'manifests', like last week for some reason I thought of rainbow and it reminded me of GOD's pact or promise with humankind that HE will never again destroy the earth with flood. Then just this Wednesday, as we were fetching our daughter from the daycare school I saw a very beautiful rainbow, actually I already saw it on my way (as I was inside the bus). I wanted my daughter to see it also (their daycare is called rainbow also) but the many trees blocked the beautiful sight that she wasn't able to see. Then I asked or thought where the rainbow ends, the next day the photogallery section of a local rome newspaper featured a photo of a (sta fe) californian fisherman fishing in this river.Where the rainbow ended.
Another thing is that I'm also fascinated by stars specially the biggest and brightest the comes out the first, at the first sign of darkness. I wondered what the name of that star was. Then yesterday, as I was doing the lesson with Luke II we came across an article where it mentioned its name (sirius) or If I remember more correctly from other previous article it is Ceres. I know some people may interpret this phenomena as some sort of telepathy, but to me it's GOD's simple way of telling me that HE hears my heart. I am Absolutely sure of this. I could enumerate all GOD's answers to my prayers but time and space limit me.